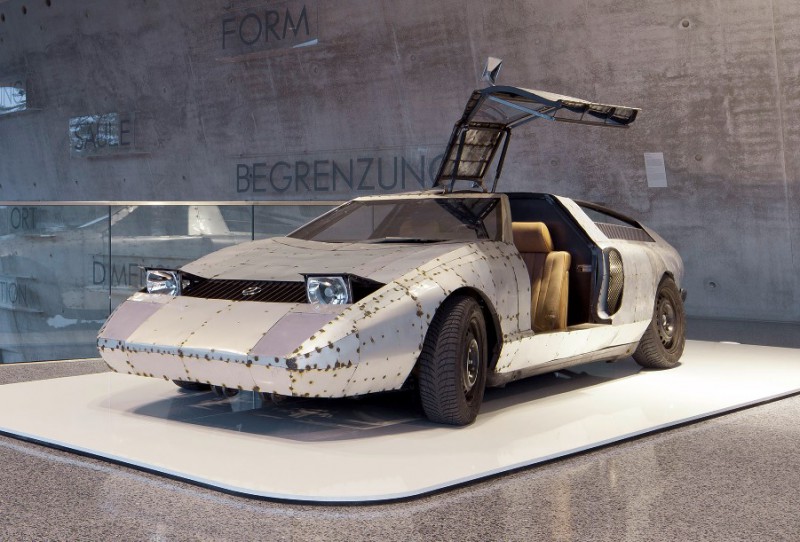 Part of the Collection’s concept consists of commissioned works, some of which relate to the product “automobile,” others to the complex of sculptures and murals. Groundbreaking, not least of all for the early international orienting of the Collection, was the commissioning of Andy Warhol in 1986 to create work on the occasion of the 100th anniversary of the automobile. A second commission went to New York artist Robert Longo, who created a series of five black-and-white automotive “portraits.” Prominent sculptures for public spaces in Berlin were commissioned from and designed in cooperation with the company by Robert Rauschenberg (Riding Bikes, 1998) and Mark di Suvero (Galileo, 1996). The latter work stands prominently on Potsdamer Platz near Keith Haring’s sculpture Boxers, 1986, which was acquired for the Collection in 1996. Since the 1980s, commissions for the design and realization of site-specific works have gone to Max Bill, Heinz Mack, François Morellet, Walter De Maria, Ben Willikens, Tamara K.E., Gerold Miller, Pietro Sanguineti, Franz Erhard Walther, Peter Halley, Jan van der Ploeg, Patricia London Ante Paris, Martin Gerwers, Andreas Schmid, Andreas Reiter Raabe, Stéphane Dafflon, and others.

The Stuttgart artist Simone Westerwinter created a portrait of the company in 2001 in the form of 60 watercolors of names and car models. Since then, numerous other commissioned works have been realized: Sylvie Fleury created six video films for the Mercedes-Benz Center Paris in 2006. On the occasion of the 125th birthday of the automobile in 2011, the Swiss artist Nic Hess, together with the Mercedes-Benz Design Department, created a room-sized installation for the gallery of “Silver Arrows” and other racing cars in the Mercedes-Benz Museum in Stuttgart. Michael Sailstorfer reflected on the design practice of “morphing” by converting a Mercedes 190 (W 201) into a road-ready C 111 using collage techniques. Algerian-born artist Philippe Parreno created the film CHZ in 2011, a cooperation of the Mercedes-Benz Art Collection with the Fondation Beyeler, Basel, itself a combination of real, temporary natural processes with cinematic fiction and staging.