Around 1989, Mercedes-Benz acquired a group of eleven large sculptures for the Stuttgart-Untertürkheim site and for the public and outdoor areas of the company’s then headquarters in Stuttgart-Möhringen, including major works by Walter De Maria, Norbert Kricke, Max Bill, Heinz Mack, and Klaus Staudt. This was the beginning of what is now a collection of around 20 large works of sculpture, some of them commissioned works, which are connected not only to their various locations, but above all to the identity of the company. Parallel to the construction of Potsdamer Platz, eight international artists were selected between 1995 and 2002, from each of whom an existing sculpture was acquired or a site-specific work commissioned. These works, by Keith Haring, Robert Rauschenberg, Mark di Suvero, Nam June Paik, Jean Tinguely, François Morellet, Frank Stella, and Auke de Vries, long provided a highly visible urban accent in the center of Berlin. With the sale of the site in 2008 and the conversion of the space by new tenants, the Mercedes-Benz Art Collection has temporarily stored some sculptures or transferred them to new locations. However, Keith Haring’s Boxer still greets new arrivals and passers-by at Potsdamer Platz. With its monumental size and far-reaching energy, Mark di Suvero’s Galileo, in the Piano-See near the theatre, offers an idiosyncratic accent.

Sculptures in Stuttgart and Sindelfingen 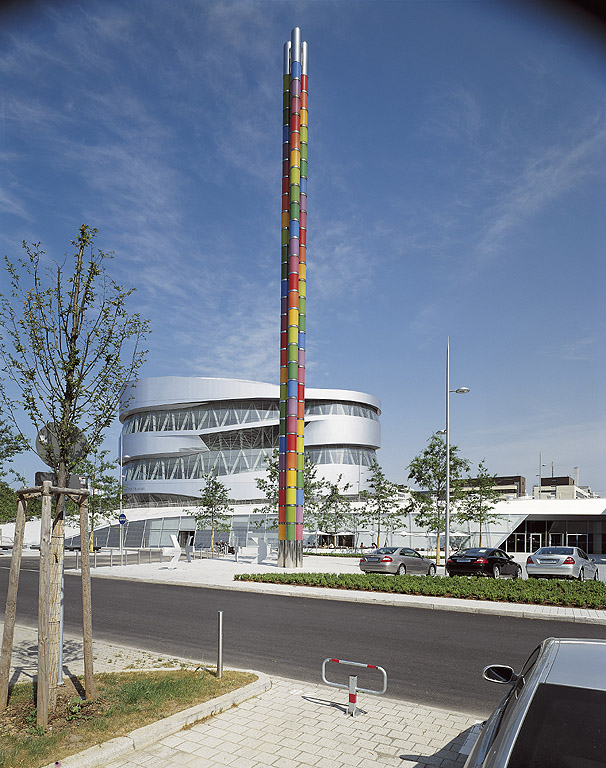 Max Bill’s 32-meter-high bildsäulen-driergruppe from 1989, prominently positioned in front of the Mercedes-Benz Museum, connects the grounds of the Stuttgart-Untertürkheim plant with its urban surroundings. Within sight of this is the sculpture Tag und Nacht, 1983, by Bernhard Heiliger. The sculpture combines a geometric-technical formal language with nature-like elements. It is dedicated to the memory of the those forced into labor by the Nazis during World War II. Associations with a naturalistic language also define the monumental bronze sculpture Taurus (Early Forms), 1999, by Tony Cragg, which binds basic molecular and geological elements into the form of a knot-like body. The granite sculpture Bleu de Vivre, 1986, by Ulrich Rückriem seems to have grown all by itself, like a tree in its natural environment. In 2018, this group of works was supplemented by two further pieces: a dynamic sculpture by Frank Stella, Prince Frederick Arthur of Homburg, General of Cavalry, 1999, and the geometric, ring-shaped interlocking steel elements of Nigel Hall’s Big River, 1998, now connect the towering, vertical building structure of the new executive building in Untertürkheim with the horizontal movements of pedestrians and vehicles.

For the spacious grounds of the Mercedes-Benz Sindelfingen plant near Stuttgart, where the final assembly of many types of vehicles takes place, large works have been acquired since the mid-1990s that aesthetically focus the open architectural structure at various points. Norbert Kricke’s airy, space-creating sculpture Die Fließende (The Flowing One), 1964, stands like a natural monument in the open outdoor space; Gerold Miller’s mural Plan 3, 2002, at the Maybach Center of Excellence, inaugurated in 2002, brings abstract, modernist currents into the 21st century. Julian Schnabel’s bronze sculpture Queequeg, 2010, derives its name from the figure of the harpooner in Herman Melville’s 1854 novel Moby Dick. The sculpture depicts, as though upside down, the tail fin of the legendary white whale.